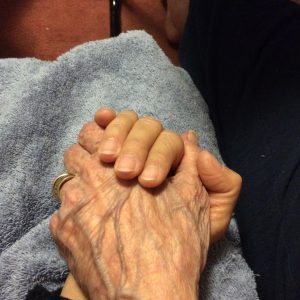 Yesterday I led a discussion on end-of-life issues in a Jewish context.

Someone thanked me for taking on such a difficult and challenging topic.

In many ways, it was not a choice.

In many ways, I was born into this work; it came to me with my mother’s milk. When my mother was asked how she came up with the idea for the Widow-to-Widow mutual support groups (in the late 1960’s), she would tell the story of struggling to breast-feed her difficult baby. She found help not from doctors, but from the La Leche League and other women who had been through this before her; she realized that the help new widows most needed also came from each other.

I was that difficult baby. I once joked with some of her colleagues that if I had been an easier baby, her work with widows – and her career – might have gone in an entirely different direction.

At the end of her life, she died slowly, steadily, over many long months, and towards the very end, she lingered for weeks longer than the hospice staff thought possible. They told us to tell her that it was OK to go, that we would be OK without her. I told them I couldn’t say that, because I knew that her response – if she had been lucid enough to respond – would be to tell me that it might be OK with me, but it wasn’t OK with her. She had no intention of leaving us. She wanted to stay.

Late one night, I sat quietly by her side, holding her hand, as she slipped in and out of consciousness. Without realizing what I was doing, I leaned in close and whispered, “It’s OK, Mom, I’ll keep the work going.”

I didn’t know what I meant, and I didn’t know why I said it. But some part of me knew that it might be the only thing that could free her. I don’t think she heard me, at least not consciously, but I felt something relax.

Why was I leading that discussion?

Why am I writing these stories now?

Because it’s my legacy.

Because I didn’t know what I meant then, but I am starting to understand now.